Our talk in March was called “Potagers” and our speaker was Chrissy Ching who is a lecturer at Pershore College and worked for many years at Birmingham Botanic Gardens.

A Potager is a way of growing a mix of fruit, vegetables, flowers and herbs all together in one growing area as the French have done for centuries. This is in contrast to the often used method of hiding the fruit and vegetables away at the end of the garden as we have tended to do in this country. The 1970’s saw an upsurge in the development of the Potager in the UK and Chrissy took us on a tour of some of her favourite gardens that make use of this method of having a garden that is both beautiful and edible. 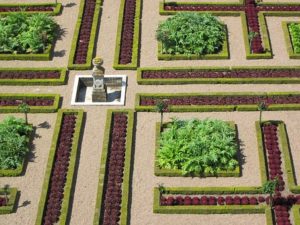 (one of the most famous historical gardens of France); Barnsley House Gardens in Oxfordshire (now a Hotel but groups may visit by appointment); Le Manoir de Quatre Saisons; Old Rectory Gardens in Northamptonshire; Hampton Court Castle; Castle Bromwich Hall Gardens and Icomb Place (a private garden in the Cotswolds).

The whole idea of growing in beds came from the monastic tradition of the middle ages, particularly in the growing of culinary and medicinal herbs. The use of flowering plants as a way to attract pollinating insects is a long-established practice in all types of gardening. Chrissy referred to several very ancient gardening Treaties from the 17th and 18th centuries which even today serve as an inspiration for garden owners and designers wishing to use the Potager system in their design.

Chrissy ended her talk with an illustrated list of coloured and interesting vegetables which would be attractive in any garden setting, from purple sprouts, through rainbow chard and crimson flowered broad beans to the stately structure of Globe Artichokes. The use of features such as elaborate cloches, unusual pots and fancy paths ensure that there is something of interest to see in a modern Potager all year round.