Report of talk by Bob Brown

Too Many Plants, Too Little Space

On 29th September Bob Brown of Cotswold Garden Flowers gave a talk entitled ‘Too Many Plants, Too Little Space’, an issue familiar to many gardeners.  Rather than dig up our lawns to create more space, Bob suggested that we reduce the size of our flower beds to encourage us to be more ruthless in our decisions, avoiding impulse buys and ensuring that any plant is earning its place (and getting rid of those that are not).

The appeal of new, rare or unusual plants could be using valuable space in our gardens but not giving much back in return in terms of attractiveness or length of flowering season.  Examples he gave were Narcissus Viridiflora, which has tiny, dull, khaki-coloured 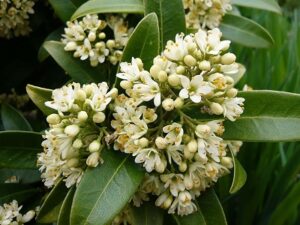 flowers and Helicodiceros Muscivorus which has foul smelling flowers that attract flies.  Instead, he suggested we should look around our local supermarket car park!  The flower beds between the parking spaces are likely to be filled with plants that do well in any conditions, are easy to maintain and provide interest throughout the whole year.  One such plant he recommended was Skimmia ‘Kew Green’.  This is a smallish, evergreen shrub with attractive, flower-like buds that form in August and overwinter before producing sprays of long-lasting scented flowers in April.

Bob also recommended we choose plants that have been given the ‘Award of Garden Merit’ (AGM).  This he likened to having 15 of the world’s experts at your elbow as you make your selection.  These plants have gone through rigorous trials and been judged for quality and performance in UK growing conditions.

His final suggestion was that we squeeze two or three plants into the same hole by selecting plants that appear at different times, such as planting oriental poppy  Raspberry Queen with Eucomis Sparkling Burgundy.

Having listened to Bob’s sound advice, many of us then proceeded to impulse buy the plants he had brought along from his nursery!