Report of talk by Dominic Hamilton

The  History  and  Restoration  of  an 18th Century  Playground

On 29 March Orleton and District Gardening Club was delighted to welcome Dominic Hamilton, Director at Painswick Rococo Garden Trust, to give a talk on the history and restoration of the Garden.  Dominic formerly worked for the National Trust at Snowshill and Tyntesfield.

In 1733 Charles Hyett, a successful Gloucester lawyer, left the smog of the city for health reasons and bought a farmhouse and land at Painswick to enjoy the fine hill views.  He enlarged the farmhouse to create a substantial house.  On his death in 1738 the estate passed to his son Benjamin.  He, heavily influenced by the classical designs witnessed on his Grand Tour, decided to create a garden modelled on the Rococo style in a narrow, spring fed valley behind the house.

Rococo, from the French relating to rock and shell forms, was used for a period of English garden design from 1740 to 1770 and is characterised by extravagance and flamboyance.  Gardens were laid out asymmetrically, only the kitchen garden at Painswick is symmetrical. It was fashionable to have follies and the appearance and sound of water was important.  Above all, the function of the garden was to have fun and parties at Painswick were often wild!

In 1748 Benjamin commissioned a Gloucestershire artist, Thomas Robins, to paint the garden and his painting is the only record enabling the fine detective work of restoration.

In 1762 Benjamin died and by 1820 many of the features had disappeared.  In 1955 when Lord Dickinson inherited there was little money and he obtained a grant to develop a forestry plantation. In the 1980s an exhibition of Thomas Robins’ work inspired garden historians to visit Painswick and subsequently Lord and Lady Dickinson were inspired to begin the restoration of the gardens which by then were a complete wilderness.  There are 27 acres in all, 11 acres constituting the core area.  The main area was cleared of trees, graded and grassed over. Buildings were stabilised, the Swan pond drained and repuddled and heritage varieties of fruit trees replanted.  The Gardens opened to the public in 1988 with much restoration still ongoing. 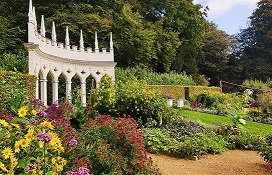 Visitors enter via The Lookout, a balconied entrance providing a panoramic view of the whole garden.  Eclectic elements within the garden include The Red House which epitomises  characteristic Rococo asymmetry with its two wings of different sizes. This is the focal point of the main vista that bisects the Garden.  It looks down towards Swan Pond.  The Exedra, a semicircular startling white classical structure, provides a focal point of the vista bisecting the kitchen garden.  Originally of timber it had completely disappeared and only archaeological investigations revealing its circular pond enabled it to be correctly rebuilt according to Robins’ painting.

The Gothic Alcove at the “foot” of the Garden is designed as an eyecatcher and highlighted in pale yellow. It is approached by a beech avenue.  The Eagle House, a hexagonal summerhouse, had completely disappeared with only its lower supporting vault remaining and has been completely restored in accordance with a later painting by Robins of 1757.

The valley is spring fed which enables water features such as the Swan pond and its cascades, the Exedra pool and plunge pool. The kitchen garden is bordered by espaliers and is cultivated organically.  Evidence of the original paths remained.

Although not featured in the original design a maze was developed in 1998 to commemorate the 250th anniversary of Thomas Robins’ painting.

In 1988 Painswick Rococo Garden Trust was formed to carry on restoration.  Many outdoor events are held and there is an excellent café. The Garden has one of the finest displays of naturalised snowdrops in the country which is a great visitor draw.  In 2019 the garden hosted 57000 visitors and Dominic hopes to increase this number to 60000.  ODGC looks forward to increasing the tally when it visits the Garden in September.